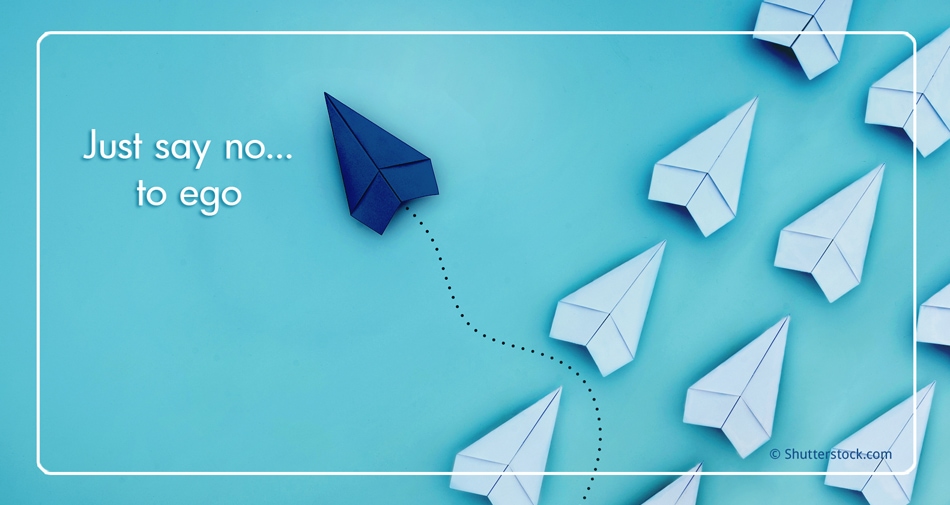 In this series, I’m trying to identify why the traditional law firm model causes misery to so many lawyers. My thought is that if we can call this stuff out and talk about it honestly, we can build a model for future legal services that better serves lawyers and clients.

In the first posts, I covered billable hour targets and competition between lawyers (financial and otherwise).

This time, I’m looking at how the lawyerly ego thrives in the traditional law firm model. By “ego”, I don’t mean conceit. I mean ego as the feeling that we are defined by things external to ourselves like money, prestige, our latest result in a case, etc.

Law school is tricky when it comes to ego. It’s like an ego-magnification factory. We go in on day one, interested in changing the world and fighting for justice.

But within a few days of starting law school, the lens shifts a bit. At my law school, for example, we had 100% exams in first year, meaning no one had a clue if they were the best or the worst student in the class until the year was over. I felt unsettled by that. I think I was used to having a certain amount of my identity wrapped up in getting good grades, and I lost that for the whole year – for the first time in my life.

Enter the summer recruitment process, which was a way of demonstrating to myself (and to peers, I suppose) that I was one of the smart ones who had come out on top in those 100% exams. So hell yes I would make sure to get a job out of that process! My life back then was a series of goals to achieve, which doubled as a checklist of my own worth as a human being. But if there was a goal that involved academic achievement, I was chasing it and agonizing over it. (And in fairness, I didn’t know at that point that a law firm job wasn’t for me. I didn’t know a single thing about what that job entailed, other than what I had seen on TV and in movies.)

When I look back, that was the period where I really entrenched my view that I was defined by the things I achieved, rather than who I had always been as a person. Law school and the call to the bar created in me a feeling that I had become something other than I had been before. I was now “a lawyer”. Or “Darlene the lawyer”. Or “this is my niece/daughter/friend/sister/neighbour, she’s a lawyer”. We lawyers can maybe be forgiven for getting confused for a while and needing to devote some energy to sorting ourselves out.

However, we can’t let this confusion lead us to shape our lives around this role we are playing if it doesn’t fulfill us or offer meaning to our lives.

“Lawyer” is our job, accessed through our degree, and it’s a privilege bestowed on us so we can find the place in the world where we can be of the highest service. It’s not who we are. This is what’s left when all the pomp and circumstance is stripped away. The practice of law can be a calling, but we don’t need to attach ourselves to our views of whatever being a lawyer is supposed to be. If I’m a joker and being a lawyer is supposed to be serious, I need to find a way to stay me, not tell myself that real lawyers don’t make jokes.

Also, we can’t define ourselves by our wins after a while. It sounds so obvious to say it, but this is because we don’t always win in an adversarial system. If we define ourselves as awesome because we win, what are we when we lose? I try to define myself as a lawyer who has positioned myself to do the best work I’m capable of doing on the planet. Even at that level, I know that I can win or I can lose and I’m still going to be ok. It doesn’t touch my core. It doesn’t mean I don’t care or that I don’t pursue the wins with the same intensity that I always did.  It just means I’m no more defined by my wins than I am by my losses.

So. How does this relate to law firms?

Law firms prey on this frailty we lawyers have. I don’t think it’s intentional, necessarily, but it is the quality that keeps the pipeline running, so to speak. Fill the pipeline with an endless quantity of people who really need someone else to tell them they are the smartest, the best, and need to be associated with an organization that constantly messages this to them, and they will deliver the most hours, the big wins, whatever it takes to get to the top. And the goal posts shift constantly. For those who thrive on the next achievement and the next and the next, this is a great environment.

However, it’s a problem for a whole lot of people. It goes hand in hand with addiction, stress-related illness, relationship breakdown, and so many other negative qualities. We need to find a way to acknowledge this in lawyers and allow lawyers to develop the muscle that takes them out of this ego-driven game. It’s fine to do this for a while – but it becomes exhausting and less and less rewarding over time for those who are not enjoying their work on its merits.

In separating ourselves from the lawyerly ego, we can find freedom. I was still in my late 20’s when I started getting comfortable with stepping away to do what I wanted to do. Later, when I did this fully, I left my job as an executive at a company to start something, not knowing exactly what that would be. I recall vividly the feeling I had when I walked down the street the next day. I was pretty unrecognizable in a baseball cap and a puffy vest (Canadian winter!) in the middle of the day, and I remember having the uncomfortable feeling that I was now a “nobody”. No business card, no title, no piles of emails to respond to. And as I kept walking, I realized that was not true… I was not a nobody – I was the exact same person I was the day before. And if I was not a nobody now, then it must also not have been true that when I was an executive I was a “somebody”. In both instances I was just me. I was always just me, but my role had changed. I found that very freeing, and I think it has made me immune to ego-driven decisions ever since. So I consider that experience a blessing.

I think it’s imperative that lawyers start taking a serious look at how the business model ramps up ego even for lawyers who don’t naturally want to go there. Tolerating a business model built on ego exacerbates the type of conflict and fighting on behalf of clients that drastically increases costs for clients and might drag them into battles they can’t win. It also might allow the lawyer to be a willing accomplice to a client who just needs a lawsuit to engage their own ego and need to be right. Arguably, the world needs less of these people, and the lawyers who enable them. Also, these types of cases clog up our courts and are certainly not the cases any of us envisioned handling when we set off to law school.

A wise lawyer might be able to untangle the forces that lead to conflict and resolve them. An ego-based lawyer may have clouded judgment, potentially to the client’s detriment.

We need to work on this as a profession, to make sure that we bring wisdom, not ego, to the table. We have a long way to go, but the first step is admitting that we have a problem.

We welcome your input at any time.

Find us on Twitter, LinkedIn and Instagram or listen to us talk more about these ideas on the Lawyer Life Podcast (LLP).