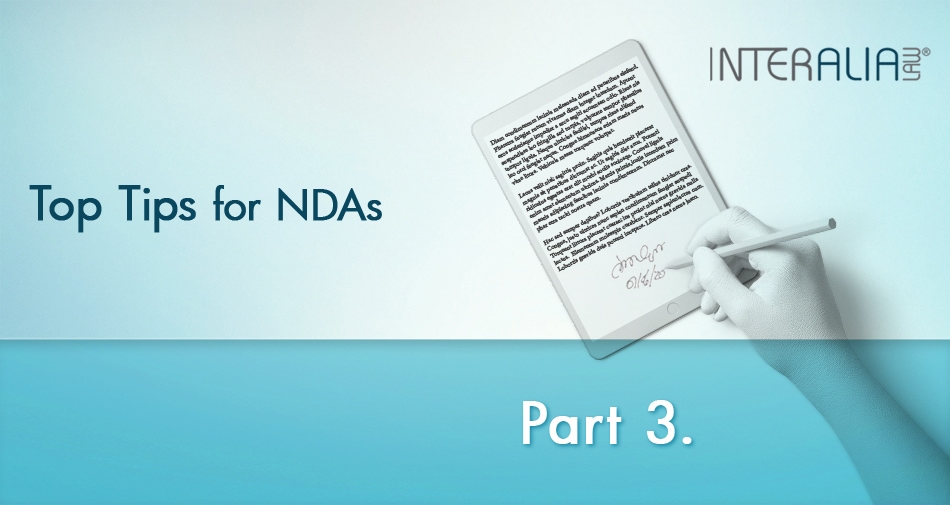 In Part 1 of this post, we suggested starting with a mutual NDA to reduce markups and negotiations. We also said that there are instances where a one-way NDA is more appropriate. For example, with certain vendors or in your employment agreements. But even if you anticipate that only one party will be sharing confidential information, it’s not a bad idea to default to a mutual NDA because (1) the terms are typically fair and reasonable, (2) thereby making negotiations fast and easy and (3) so that you are covered if both parties end up sharing information. Reality check – three months into a partner collaboration, who will remember the NDA is only one way? Who will call legal or pull up the NDA and read it? Exactly – no one.

But just because you have an NDA in place, it doesn’t mean you should provide TMI (too much information) to the counterparty. Can the information be framed in an anonymous or pseudonymous manner? Can some pieces of the information be left out while still preserving the essence of the information you are trying to convey? Examples include test data or marketing campaigns with some elements redacted.

Don’t forget that in a mutual NDA, both parties have agreed to keep the other party’s information in confidence and to use reasonable measures to protect it. Do you want this responsibility for information that you really don’t need to know? If you don’t need the information, tell the counterparty that you don’t want it.

It’s so easy to slip up on your obligation to protect confidential information from disclosure, whether your own or someone else’s. Think about a stolen laptop, a phishing email, or an employee unfamiliar with security protocols. Once the information has been disclosed, often there is no remedy that is satisfactory to the aggrieved party. Assuming you are even aware of the disclosure, it takes time, money and effort to sue the counterparty. Injunctive relief will stop the counterparty from continuing the disclosure but sometimes, that initial disclosure is enough to cause you irreparable harm. Think about trade secrets or if your competitor has seen your roadmap or your coding genius. Alternatively, if you bring a claim for breach of contract, it is very difficult to quantify your damages and to convince the court that your calculations are reasonable. Of course you think your company is the next [insert Facebook, Google, Amazon, Tesla] and you are poised to disrupt the industry, but will the court agree with you?

I hope this series has provided you with some tips for handling NDAs and some issues to think about as your build your company and put in place privacy and security protocols. As always, someone at Inter Alia Law would be happy to discuss your legal contracting needs.

Each Inter Alia lawyer has worked both in-house and in private practice. We love solving problems for our clients, and this blog gives some insight into how we do this practically and efficiently. If these tips speak to you, or you think we could help you, please contact darlene@interalia-law.com.